Slayer is based on combat: by defeating certain Monsters assigned to you by Slayer masters you gain Slayer experience.
Once you reach higher Slayer levels you will be able to slay specific Slayer monsters with unique drops, like Abyssal demons which drop the Abyssal whip.

Once you've chosen a task you need to kill the amount of monsters that the task displays and you will gain Slayer experience for each kill you make. These kills have to be your kills: You have to deal the most damage to a monster and kill it before you will gain any slayer experience.


After you have completed the task, you will be given Slayer points, based on the difficulty and amount of monsters you have defeated.


To follow your progress on a task, you can buy an Enchanted gem from every slayer master. The gem will let you know what task you currently have, if there are any tips available and how many monsters are left to be killed.

The Full slayer helmet is a upgraded version of the Slayer helmet. It can be made combining the Slayer helmet, Black mask, Focus sight and Hexcrest. You need a level of 55 crafting and 55 slayer in order to combine them.

There are seven different Slayer masters in Emps, each assigning Slayer tasks that differ in difficulty, amount and type of monster. If your combat level is fairly high, you should do the harder slayer tasks, they will give more Slayer experience.

Hunding is located in the pub at Barbarian village. This Barbarian gives the easiest tasks and the monsters will be located around Barbarian village. He can also give you one of these tasks free of charge if you don't like the current task you have (from any slayer master).

Chaeldar is located in a tent in Al-Kharid. This little fairy gives easy slayer tasks. Chaeldar's slayer tasks are recommended for players up to combat level 75. She can also give you one of these tasks free of charge if you don't like the current task you have (from any slayer master).

You can find most of these monsters in the first parts of Barbarian dungeon, Edgeville dungeon and around Barbarian village.

Mazchna is located in Lumbridge, in a house just south of the castle. The demon slayer master gives medium slayer tasks. Mazchna's slayer tasks are recommended for players of combat level 75 to level 100.

Jossik is located in Rellekka, and usually assigns Slayer monsters that can be found in the Rellekka slayer dungeon or around Rellekka. Jossik can give very easy monsters, but also very hard monsters.

Vannaka is located in Edgeville, just next to a furnace close to the bank. This great warrior gives hard slayer tasks. Vannaka's slayer tasks are recommended for players of combat level 100 to 115.

Duradel is located in Burthorpe, close to the Warrior's guild in a small house. He gives players very hard slayer tasks and boss slaying tasks. Duradel's slayer tasks are only recommended for the toughest players, of combat level 115 and higher.

Duradel might also give you a task to slay a boss. These monsters do not require a specific slayer level. Bosses give much more Slayer experience than a 'normal' monster, and generally also drop better loot.

She can be found in the Ancient caves and assigns very hard Slayer tasks. The set of tasks consists of high level Slayer monsters and bosses. It is recommended to accept tasks from Shenven with high-end equipment.

She can be found in the Edgeville, in the house where General store is located and assigns Wilderness Slayer tasks. Tasks consists of doing them in rather dangerous areas, sometimes even multi-areas, so be aware of any Pkers.

If you don't like your current task you can also cancel it at the cost of 1,000 slayer points. This is a nice alternative to getting an easy task from Hunding or Chaeldar for those that don't want to spend their time killing things like goblins and icefiends. You can change your task by asking any slayer master to cancel it, and you can simply get a new task from them right after. Be wary that you can still get the same task as you had before cancelling, it might end up costing a lot of points to get the task you want.


You do not need specific items to slay any of these monsters. The only item(s) you will need is a Facemask or a Slayer helmet to enter the Smoke dungeon, where several Slayer monsters are located.

Some items in Emps-World might help you with your Slayer tasks and will make leveling up or finishing your tasks much easier. You can obtain them in several ways. 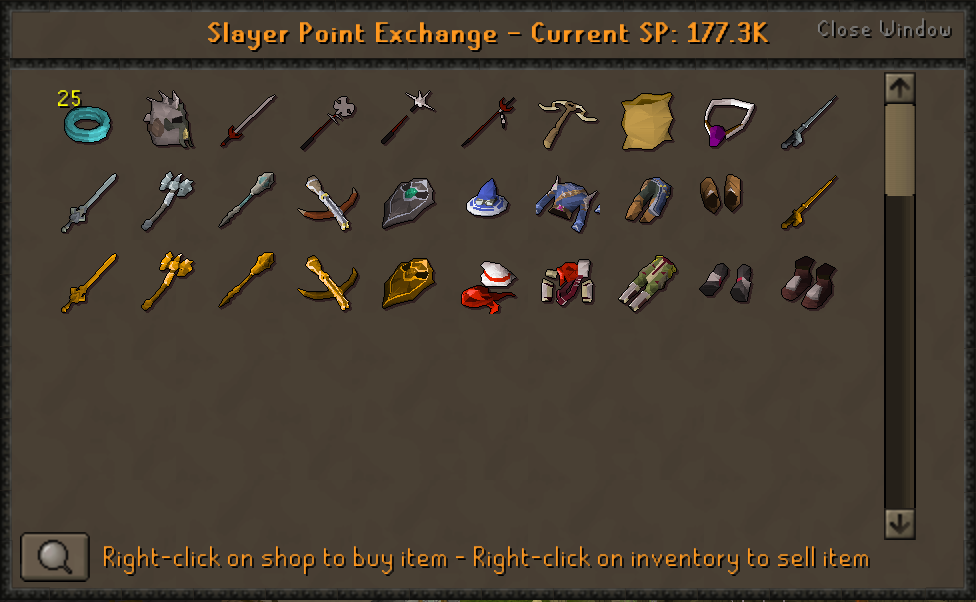 The interface of the Slayer points exchange. Your current points are shown in the title bar.