Emps-wars is a team based PvP safe minigame in which players fight against each other in 2 teams to gain control of the team's castle. Players get Emps-Wars tickets for playing this minigame, these tickets can be spent at the Emps wars exchange for items. The goal of the minigame is to kill the opposing team's boss. The round is over when 15 minutes have passed, a boss has been killed or either team reaches 10 points through capturing flags.

Emps wars consists out of a lobby with a bank chest, the Emps wars exchange run by Lanthus, and a square battlefield with two castles and a river with an outpost in the middle. In the lobby players can go in the Guthix portal (take off your cape, as you will be wearing a team cape in the minigame) to be randomly put in the Zamorak (red team) or in the Saradomin (blue) team. The game will start once 10 players have joined either side and have waited 120 seconds. The players will be teleported to their castle and can stack on gear and healing bandages in order to siege the enemy castle.

To reach Emps wars you can either talk to the Tyras guard in Falador park, or use a Ring of duelling to teleport to Castle wars straight away.

Each team has a boss that can be killed. The saradomin team has the Ice queen and the zamorak team has Fahreed. They have no defense bonuses, you will be able to damage them regardless of your levels or gear. Their attacks deal damage based on your hp level, which makes it so that you won't get killed as fast if you're at a low hp level. The amount of hitpoints they have scales based on the size of your team, the more players the higher the enemy boss' it will be.

Castle-Wars is a team-based minigame. You will need the rest of your team and coordinate well in order to win a round. If you want to win consistently doing well on both offense and defense is a good idea. There are also some items and other things you may take advantage of while playing the minigame.

On the bottom floor of your castle there are a few tables with some useful items.

To defend your castle you'll want to keep the other team out of it as much as possible. Using barricades, closing doors or having people freeze the enemy team will win you a lot of time. Keep in mind that barricades might limit the movement of your own team as well. If people are already at your boss you should kill them so that they stop damaging it.

Pretty straightforward, just move to the other castle and start attacking the boss. If the boss is heavily defended going for flags is a good idea. If you get attacked at the boss pray accordingly and focus on dealing as much damage as you can before you die.

A win will award players 8 tickets, a loss 1. Capturing a flag awards the player 4 tickets and killing players from the opposing teams awards 0.5 tickets. The rewards can be bought from Lanthus. 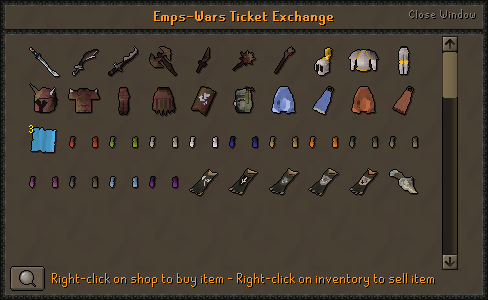