Difference between revisions of "Shooting star" 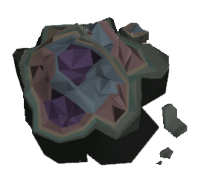 A fallen star in one of the last stages.
The Shooting star distraction and diversion is a distraction event that appears around 2 hours after the previous one has been fully mined.

When a star crashes down every player currently online in that world will receive a red-printed game message about a noise the player hears that varies according to the distance of the player to the star. To receive a hint about the location of the most recent star players can go to the Observatory just north of Castle wars and talk to the Observatory assistant. The Observatory professor there will tell you if a star has landed or give an indication on how long it'll take before another star falls. Alternatively players can check the location of a star from the telescope in player-owned houses that can be built using the Construction skill.

A fallen star can be of different sizes, from just 6 to 9 layers. With every extra layer players need a higher Mining level to mine it, up to level 90 for 9 layers. After players with a higher mining level have reduced the star to less layers, players with lower Mining level will be able to join too.
When mining a fallen star players will receive Stardust and occasionally a random gem, including one Onyx gem from each star. The player who mines the first stardust of a new star receives 10k bonus Mining experience as a reward for finding it.
The experience granted for mining the star is 120 + 2 times the Mining requirement for the current layer. A player with 99 mining will receive 300 xp per stardust at the first layer of a size 9 star. A size 9 star contains 1300 fragments of stardust.

With stardust players can buy several rewards from the Sprite that appears when the star has been fully mined.

Players can talk to the Observatory assistant to receive a hint about the location of the fallen star. Stars generally fall close to a quarry or similar mining spot, like the rune essence mine route in east Varrock. The best way to find it easily is to look for the mining icon on your minimap close to the location described.

You can exchange your stardust for rewards when you talk to the Star sprite at the end of every Shooting star event. It will stay for 5 minutes after the last stardust has been mined.