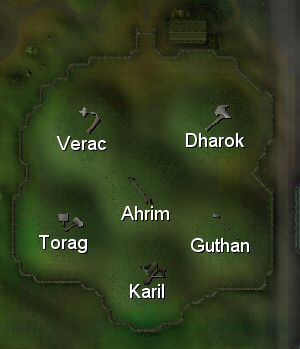 Dig on top of the hills to access one of the tombs of the brothers.

The Barrow Brothers is not a safe minigame. This means that when you die, you will lose your gear that you are wearing.

To enter the catacombs you will need a spade. Use the spade on top of the hills to enter them. Be wary of your Prayer points, as they will be drained as long as you are in the catacombs of the Barrow brothers.

The Barrow Brothers are undead, if you have a Salve amulet equipped while fighting them you will gain 20% bonus damage and accuracy.

There are six different Barrow brothers, each with their own unique strengths. Every Barrow brother has 140 hitpoints. In one of the tombs of a Barrow brother you will find a tunnel, go back out of the catacomb and kill the rest of the Brothers. Return to the tunnel, where you need to find the correct path and in the end solve a puzzle to get to the middle to find a chest, where you can claim your reward.

Verac's catacomb is located under the north-west hill. When fighting this Barrow Brother it is always recommended to use Protect from melee prayer since he attacks with melee. Verac's armour set gives Verac a chance to ignore the player's armor bonuses. So watch your health when fighting him as he can hit very accurately.

Dharok's catacomb is located under the north-east hill. Dharok will attack with melee but a lot slower than his other Brothers (speed of a 2handed weapon). Dharok's armour set gives Dharok a bonus: when his health runs lower he will start to deal more damage so be careful when he is low health as he can hit easily over 70. Protect from melee prayer is always highly recommended when fighting Dharok. Watch your health when fighting this brother and don't be afraid of keeping your health high. When you run out of prayer it is advised to leave the catacomb and regenerate.

Ahrim's catacomb is located under the centre hill. He will attack you with Fire Wave so it is advised to use Protect from Magic.

Torag's catacomb is located under the south-west hill. He will attack you with melee so it is advised to use Protect from Melee. Torag is often seen as the weakest brother but should not be taken lightly due to his high defense. The fight with Torag can be difficult for players with a lower prayer level since the fight can take a while. A Bandos godsword or Statius's warhammer special attack can prove useful if it takes you a long time to bring him down.

Guthan's catacomb is located under the south-east hill. He will attack you with melee so it is advised to use Protect from Melee. Guthan's armor set gives him a chance to regenerate health with the damage done to the player. You will recognize this healing by "purple souls" rising up.

Karil's catacomb is located under the southern hill. He will attack you with range so it is advised to use Protect from Range.

The combat levels of all the monsters slain within the minigame are tracked and it affects the quantity of the stackable items awarded. To get the full reward, the combat levels of everything slain by the player need to add up to at least 1,000.